The woman who would become the “other Washington Monument” had a tragic early childhood. 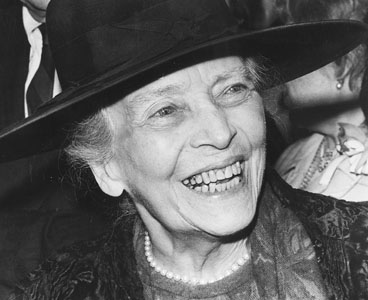 Alice Roosevelt Longworth was TR’s eldest child. She also lived the longest of her siblings – nearly one hundred years! 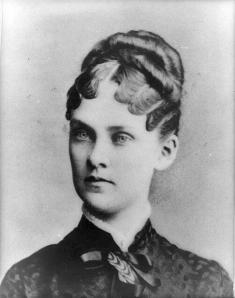 Alice Lee, the first Mrs. Theodore Roosevelt, was only twenty-three when she died in childbirth.

The baby’s father was twenty-five year old Theodore Roosevelt, a New York assemblyman. He had been summoned from Albany the day before by a telegram joyfully proclaiming his new fatherhood. Only hours later, he was warned at the door by his brother, who announced the impending crisis saying, “This house is cursed.” Theodore Roosevelt barely had time to hold the hands of his dearest beloveds before he closed their eyes.

The grieving young father was in no condition to care for an infant daughter. He left her in care of his older sister and went to the Dakotas to become a cowboy and forge a secret vault in his heart to store his memories. And plan a future. 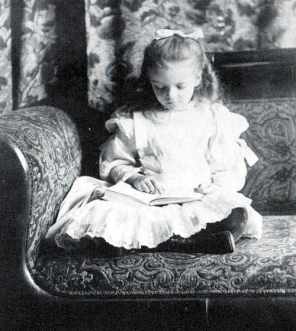 “Baby Lee” as she was called at first, was raised by Theodore’s sister for her first three years.

Alice would be called Baby Lee for her first three years, lovingly raised by her Auntie Bye, as Anna Roosevelt was nicknamed.

When Theodore married his childhood friend Edith Carow three years later, he had decided to allow his sister to formally adopt Baby Lee. Edith would not hear of it. She is reported to have said, “She is your daughter, and now she will be our daughter, and sister to whatever children we will have.”

Four brothers and a sister would be born within ten years, and Baby Lee, or Alice, would be called “Sister” within the family for the rest of her very long life. “Sister,” however, had one unique advantage over her younger siblings: grandparents.

The Lees were an old wealthy Boston family who had loved their dynamic son-in-law, and were understandably devastated when their daughter died. While they always had a cordial relationship with the new Mrs. Roosevelt, they desperately wanted their granddaughter to remain in their lives. She would visit them for a few weeks each year, especially since they had created a sizeable trust fund in her name, partially as “bait.” Of all the Sagamore Hill Roosevelts, Alice would be the only one “with money,“ according to her step-mother.

Alice Roosevelt looked very much like her mother: tall, slim and willowy, with finely chiseled features. Otherwise, she was all Theodore. She had his insatiable curiosity about everything – a trait shared with all her siblings. She had his wit and way with words, perhaps even more caustic. She had his zest for life. She had his rebellious soul and perhaps, more than anything, his passion for politics.

“Sister”, as she was called within the family, was privately tutored, and boasted that she never had a day of formal schooling. Some say she was a brightest of all TR’s children.

Alice was the only Roosevelt offspring who never had formal schooling. She was privately tutored, and some considered her to be the brightest of them all. Her relationship with Edith (who she would always call “Mother”) was somewhat spotty. When they quarreled from time to time, as all mothers and daughters do, Alice would pack herself off to Auntie Bye, with whom the true bond had been forged from birth.

With her younger siblings, “Sister” was, and would always be, a devoted older sister. Her father, however, would be the male-figure who would dominate her entire life – and she lived to be nearly one hundred. She adored him. He adored her, as he would all his children. But talking politics with Alice, was like dessert.

When Alice was seventeen, her father suddenly became President of the United States, following the assassination of William McKinley. The new First Daughter dazzled Washington as the first presidential offspring to become a genuine celebrity. She was pretty and fashionable, and outrageous. She preferred to shock the public above all else. She smoked cigarettes in public, turned cartwheels on the White House lawn, stayed out till all hours, and treated everyone abysmally – something she readily admitted in her later life, albeit with a humorous twinkle and without any real sorrow or apology.

Alice Roosevelt became Mrs. Nicholas Longworth while her father was still President. Her wedding was in the White House.

She was marvelous copy for the newspaper reporters, and her comings and goings were reported daily, as were her parties, her friends, her non-friends, her escorts, her escapades and even her favorite color. “Alice Blue” became the hot color of those early years of the twentieth century, and a popular song was dedicated to her. If she was obnoxious, she was forgiven. She was much too good a headline!

With all those rambunctious Roosevelt qualities, it is easy to realize what a handful she was. Theodore Roosevelt once said he could either run the country or manage Alice. He could not do both.

Her formal “debut,” the traditional introductory party for young women of high social stature, was not only held in the White House, but was attended by hundreds. Two years later, also in the White House, Alice married Ohio Congressman Nicholas Longworth. She had no bridal attendants. She wanted all the attention herself – and she got it.

Theodore Roosevelt might lose his little girl to marriage – but he would have a daughter for the rest of his life.