Lucy Hayes and the Laced Oranges 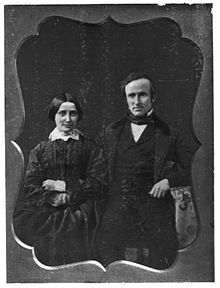 Young Rutherford and Lucy Hayes. Shortly after they married, he “took the pledge” of abstinence, and remained true to his word.

Lucy Hayes has gone down in history as “Lemonade Lucy” for banning spirits in the White House – but did people find a way around it? Samuel B. Tilden was the Democratic Governor of New York, and won the popular vote in the Presidential election of 1876. He also won the electoral vote, but was outflanked by some Republican maneuvering.

The election of 1876 was one of the most fractious and genuinely corrupt in history. A decade after the Civil War, an unpopular Reconstruction policy was splintering the country. Samuel Tilden, Democratic Governor of New York, was the likely victor, winning the popular vote but was seemingly finagled out of the presidency by some very fancy political footwork by the Republicans in the electoral college, thus making Rutherford B . Hayes, Governor of Ohio, the 19th President.

The incoming First Lady Lucy Webb Hayes (1831-1889) was a devout Methodist, and a lifelong teetotaler. A devoted wife and mother, she had become enthralled by the preachers and orators who railed against John Barleycorn. Her husband, a tad less virtuous, had been known to bend a convivial elbow in fellowship. But that was back in his youth. In the early days of their marriage Hayes had taken the pledge, possibly in compliance with Lucy’s request, and signed the book in the presence of the pillars of local society who bore witness. Breaking one’s word was a serious offense against one’s honor and integrity. Rutherford B. Hayes was a man of his word.

“Rud” Hayes was a lawyer, who at aged forty, enlisted in the Union army and rose to become a major general – a field general.  He had led his troops in battle and was wounded four times, once seriously. He was blessed with a character and kind personality that engendered not only respect from his men, but their sincere affection. Both Rutherford and Lucy Hayes would remain deeply involved in veterans’ affairs for the rest of their lives.

Rutherford B. Hayes, 19th President, had been a lawyer, a wounded Major General, Congressman and Governor of Ohio. He distanced himself from ay chicanery, but was happy to assume the Presidency.

After the war, he served two terms in Congress and then was elected a two-term governor of Ohio. In those post-rebellious years, a Republican lawyer, a wounded general, congressman and governor were impeccable credentials. Being from Ohio, an important industrial state with thousands of veterans, neither North nor South, made him practically unbeatable.

Alas for him, the scandals of the Grant administration, along with the violence created by a heavy-booted Reconstruction policy, turned the tables and did the unthinkable: nearly elected a Democrat – the party many claimed had caused the Civil War. Fortunately for the political powers that were and still wanted to be, they could nitpick a few electoral votes (which indeed had produced a few elements of viable corruption) into Republican victories and swing the election.

Hayes himself was a decent sort.  He assiduously remained above the fray, turning a blind eye and a deaf ear to the disputatious electors, preferring to keep his image of “squeaky clean.” The Republican politicians won out. Hayes was elected.

At the time the Hayeses were in the White House, the Women’s Christian Temperance Union had grown into a huge moral lobby with major political implications. Neither Hayes nor his wife had actually joined the organization, nor would they ever.

Perhaps because of the scandals and suspicions surrounding the election, plus the polarizing Reconstruction issues facing them, banning spirits in the White House must have seemed like a good idea for a diffusing red herring. After all, who could find fault with people who opposed drunkenness? The new First Couple were unassailably righteous. And dry. But whose decision was it?

President and Mrs. Rutherford B. Hayes were a conventional and morally upright First Couple.

Lucy Hayes usually gets the blame or credit, depending on your point of view. The moniker “Lemonade Lucy” was given to her during their administration, and she reportedly wasn’t happy about it. By her own admission in letters and diaries, she considered herself a shy woman, and while personally temperate, she insisted that she did not wish to tell other people what to do. She claimed that if someone wanted a glass of brandy or champagne, it was not her concern. Besides, she claimed to be in favor of temperance, not abstinence.

Nevertheless the morally upright women of the WCTU commandeered her as their heroine, singing her praises to all who would listen. They wrote stories about her in their newspapers, commissioned her portrait, and refused to be swayed by the fact that she still declined to formally join their ranks. 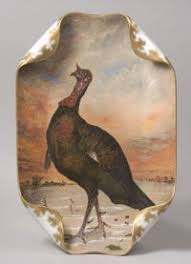 One of the elaborate and lavish pieces of dinnerware that Mrs. Hayes commissioned for the Hayes White House. The oranges created more excitement, however.

Making the White House bone dry may have been honorable, but it was not a popular call amongst Washington politicos who enjoyed their casual vices of fellowship. Perhaps it was Hayes himself who issued the dictum. Perhaps Hayes enlisted Mrs. Hayes to take the heat, since chivalry was still in flower, and nobody would dare criticize the First Lady for her unimpeachable virtue. They might poke a little fun, but they would not be rude.

The upshot was that there was no booze of any kind, not even wine or champagne, for four years. The White House social scene between 1877-1881 was always gracious and occasionally lavish, but very dull.

The story goes that a large bowl of oranges was always placed in the gentlemens cloakroom of the White House prior to a social occasion. They went like hotcakes. It became a popular congregating place for the politicians since (the story continues) the oranges were laced with rum.  Ha ha.

Then, of course, there was the conflicting story that yes, there were “laced” oranges, but it was only “rum flavoring.” Ha ha HA.

Historians have pondered over this for more than a century and they are still as divided about it as they are about the election of 1876.

We will probably never know for sure.

5 Responses to Lucy Hayes and the Laced Oranges