Eleanor Roosevelt Looks In The Pot

Eleanor Roosevelt had a decade of social and political activity when her husband became New York Governor in 1928. But she still had lessons to learn.

Eleanor Roosevelt, about the time she was First Lady of New York.

Eleanor Roosevelt (1884-1962), born to an aristocratic New York family (Theodore Roosevelt was her father’s brother), was orphaned by the time she was ten, and raised by her maternal Grandmother Hall and an assortment of live-in aunts and uncles, all of whom were a little “dotty.”

She spent the only happy three years of her youth at a finishing school in England. Once graduated at eighteen, she returned to New York, and made her obligatory “social debut.” After that”ordeal” was over, she found her true calling by volunteering (via the socially acceptable Junior League) in a settlement house on New York’s Lower East Side. She loved it!  And they loved her.

Eleanor Roosevelt was twenty when she married her 5th cousin Franklin Delano Roosevelt.

But at twenty, when she married her fifth cousin Franklin Delano Roosevelt, she returned to the “accepted way of life” of New York’s upper crust. She bore six children within the first ten years of her marriage. One died. She was not particularly happy. Socializing was not her forte; she wanted to be useful.

Then, when World War I finally came to American shores, she began finding some outlet for her enormous energies by volunteering at Red Cross canteens. She was happy to pour coffee and make sandwiches. She could do better, of course, but. it was a start

Eleanor and Franklin Roosevelt would have five children, but “home and family” activities were never fulfilling enough for Mrs. R.

Women were finally given the constitutional right to vote in 1920, and thirty-five-year-old Eleanor Roosevelt was encouraged to join the League of Women Voters. She had never been a “suffragist” per se; never marched, never chained herself to fences, never expressed anything other than mild, or non-committal support. But now, she felt obliged to understand the essence of what she would be voting for – or against.

Franklin Delano Roosevelt had been involved in politics since the early days of their marriage, so of course Eleanor was familiar with its elements, and of course, her politics and his coincided. Perhaps his coincided with hers, since it would always be Eleanor who was the more “liberal” in her social and political attitudes.

But in 1922, Franklin Delano Roosevelt contracted polio, and would spend the rest of his life in a wheelchair, or wearing heavy braces. His formidable mother hoped his “condition” would rescue him from the disreputable elements of politics, and he would become the “country squire.” Eleanor disagreed. So did Louis Howe, FDR’s oldest, closest, and perhaps wisest political advisor (and one of the “disreputable elements” that Sara Delano Roosevelt loathed). It would be Eleanor and Louis Howe who encouraged FDR to keep one finger on the public pulse and another in the political pie.

As part of a concerted campaign to help her husband, Eleanor began serious involvement in social organizations in New York.  She visited factories, championed labor unions, immigrant needs, educational efforts and state politics.  All this activity brought her into close relationship with Governor Alfred E. Smith, an uncultured Irishman from the Lower East Side, who was making a national name for himself.

By the time FDR ran for, and was elected Governor of New York in 1928, Eleanor Roosevelt had a long resume of her own accomplishments, and an even longer contact list of social and political resources.

The new First Lady of New York was not entirely happy at the turn of events, at least as they pertained to her. She did not want to be relegated to the “social” background like other Governors’ wives, hosting tea parties and accepting bouquets from school children. She wanted substantive assignments.

The new governor agreed. He needed her to be his “eyes and ears” since he could not get out and about very much himself.

Very early in his administration, he asked “his missus” to make an inspection tour of several of the state prisons that came under his jurisdiction. They were his responsibility, and he wanted to make sure that the inmates were treated humanely, and fairly. 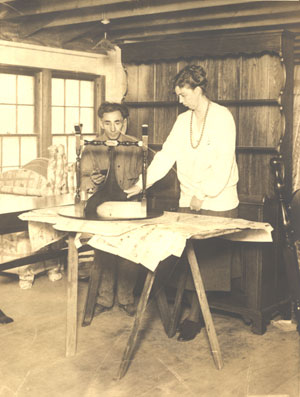 Eleanor Roosevelt visited hundreds of factories, mines, prisons, founderies and related places of occupation in order to get a true “feel” for what we needed.

Eleanor duly spent several days making rounds, and returned with armloads of paperwork and reports for the Governor. When they discussed her “travels,” FDR did not want to see the paperwork. He wanted her observations and “impressions.” What she saw and what she thought.

He asked her about the food. “Did you inspect the kitchens? Were they clean?   Were the prisoners getting enough to eat? Was the food nourishing? Was it reasonably tasty?” Eleanor was complimentary, and assured her husband that she toured all the kitchens. Then she produced the weekly menus that she had received from the wardens.

“But did you look in the pot, Eleanor? Did you taste the food?” he asked.  She had not, and thereby learned valuable lessons: just because the menu says “beef stew” does not mean that it is properly prepared.  She needed to look in the pot and taste it to make sure it wasn’t just cornstarch gravy and a few stray potatoes and peas.

Eleanor Roosevelt would learn to push harder to get to the essence. She would not put her trust merely in what someone told her; she would need to see for herself and draw her own conclusions. Then too, there is the lesson that even the smallest details provide great insights.

Those were lessons she never forgot, and extraordinary woman that she was, instinctively knew how to apply them in dozens of other situations.