Martha Washington died in early 1802. She had never set foot in what is known today as the White House in Washington, DC.

An etching said to be the young Martha Custis Washington.

Martha Dandridge (1731-1802) was only seventeen when she married Daniel Custis, a near neighbor from New Kent County, Virginia, along the Pamunkey River. The Custises were extremely wealthy and Daniel Custis, more than twice Martha’s age, had waited a long time to marry.

Eight years later Daniel died intestate (without a will), which meant under Virginia/British law, his vast property was divided into thirds. One-third to each of his surviving children (John and Martha, ages 4 and 2) and one-third to his widow. 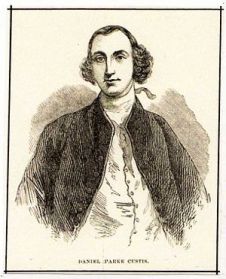 A likeness said to be Daniel Parke Custis, the first husband of Martha Washington.

His 18,000 acres and 300 slaves also included a comfortable house, called “The White House,” and its treasure in furnishings and accoutrements. Also, according to Virginia/British law, her new husband became “owner” of Martha’s property, and guardian for the property of Jacky and Patsy, as the children were nicknamed.

Martha Custis married George Washington, a little more than a year after Daniels’ death, and many sources believe they celebrated their wedding in The White House. Then she moved to Washington’s plantation at Mount Vernon, some hundred miles north.

George Washington was not only a wise and honest guardian of the Custis inheritance, he was also an affectionate stepfather. His semi-annual files detailing how the children’s monies were being spent were carefully prepared, and indicate that they were provided with the very finest of everything.

The New Kent property was too far for hands-on day-to-day management, so it was rented out, a common occurrence. Washington periodically visited the estate, particularly when the House of Burgesses was in session in Williamsburg, then capital of the Virginia Colony. Washington served as a Burgess for fifteen years prior to the American Revolution.

Jack Custis, Martha’s son, married when he was  nineteen. His bride was seventeen. Despite their youth, George Washington turned over the White House estate to his stepson, and the young couple lived there for a few years.  They had four children: three daughters and a son.

Jack died at twenty-six, from a camp fever that he contracted during the siege of Yorktown in 1781, intestate, like his natural father. The property came to his only son, George Washington Parke Custis, an infant at the time.

Martha Washington was devastated by Jack’s death, and partly to console her, and partly to assist his widow, who they loved dearly, the Washingtons arranged to raise her two youngest children (Nelly and “Wash”) at Mount Vernon. (Jack’s young widow Eleanor remarried  and had several more children. The Washingtons always considered them “family.”)

G.W.P. Custis (1781-1857) was not yet twenty  when his step-grandfather died. Due to financial and legal complications in Jack’s estate, the White House property did not fall under his control for another twelve years. By that time, G.W. had married and began building Arlington House as a memorial to his late step-grandfather. It was on a hill overlooking the Potomac River, in view of the President’s Mansion in Washington DC.

Meanwhile the White House in New Kent County burned down, but was eventually rebuilt into a pleasant six-room house.

Mary Custis Lee, the only surviving child of G.W.P. Custis and the wife of Robert E. Lee.

G.W. lived to a ripe old age, but only a daughter, Mary Anne  Custis lived to maturity. In 1831, she married a young West Point graduate with a fine pedigree of his own: Lt. Robert E. Lee. They had three sons and four daughters, but due to military assignments, Lee was away most of the time. His wife and their growing family lived with her father in Arlington House.

According to G.W. Custis’ will, the Arlington estate (after his daughter’s death) would go to the Lee’s oldest son Custis. The White House property went to their second son, nicknamed “Rooney.” Rooney Lee began to repair the property which had fallen into neglect.  A third property was willed to Robert E. Lee, Jr.

Early in the Civil War, the Lee plantation at Arlington was confiscated by the Union Army, and within months, a cemetery was dug in the front yard, making it forever “unliveable.” Mary Custis Lee, by that time, was an arthritic invalid confined to a wheel chair.  Along with her unmarried daughters and Rooney’s wife Charlotte, Mrs. Lee went to live at The White House in New Kent County, where they hoped to be out of harm’s way. 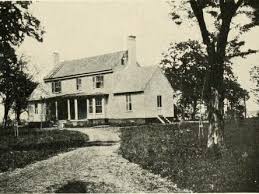 A vintage photograph of The White House, rebuilt by Rooney Lee.

General George B. McClellan had other plans. His Peninsula Campaign of 1862  included New Kent County. The property once owned and managed by Martha and George Washington would be commandeered as a supply depot. General McClellan allowed Mrs. Lee and her family safe conduct to travel to central Virginia.

Mary Custis Lee left a note pinned to the door for the soon-to-be Union occupiers. “Northern soldiers, who profess to reverence Washington, forbear to desecrate the house of his first married life, the property of his wife, now owned by her descendants,” she wrote, even though a newer house had long ago replaced the original. The Northern soldiers who camped near the White House respected Mrs. Lee’s wishes. Instead of looting it, officers stationed sentries to protect it. Newspapers including The New York Times carried a story that one officer scribbled a response below her note. “Lady: A Northern officer has protected your property in sight of the enemy, and at the request of your overseer,” it read.

Despite good intentions, war was war, and the house was briefly turned into a hospital.  Then it was burned again.