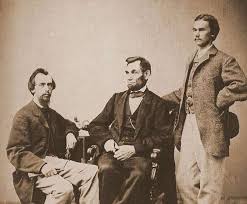 Lincoln and his secretaries, Nicolay (l) and Hay (r)

John Hay had just graduated from Brown University when he met Abraham Lincoln.

John Hay (1838-1905) was the nephew of Milton Hay, an Illinois attorney and friend of Abraham Lincoln, nominated in 1860 as the Republican candidate for President. The uncle arranged for his nephew, in a 19th century equivalent, to “work the campaign.”

Lincoln took a shine to the young fellow who was obviously bright, and had a ready wit. Hay also met young Robert Lincoln, who at eighteen was about to enter Harvard. They became lifelong friends. He also met a young journalist a few years his senior – John G. Nicolay.  They would become lifelong friends as well. 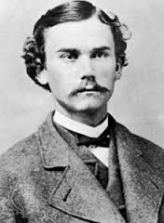 Young John Hay was only twenty two when he became Lincoln’s private secretary.

Lincoln was elected President and invited Hay to be part of his staff in Washington, as assistant to Nicolay, who he appointed as his private secretary. Only one secretarial position was budgeted, but Lincoln was certain there would be plenty of work. He put Hay  on the payroll of the Department of Agriculture – assigned to the White House. Presidents usually know how to finagle.

Lincoln was personally and paternally attached to his secretaries, often relaxing in their office during “down time.” They in turn, were deeply devoted to The Tycoon, as Hay nicknamed him. 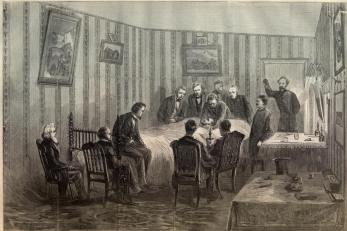 One of several “recreated” deathbed vigils of the death of Abraham Lincoln.

At the time of Lincoln’s death, it was a common Victorian tradition to cut locks of the deceased’s hair for mementos. One of the doctors at the deathbed vigil did so, carefully cutting six strands of hair from the head of the dead President.

A few years later, John Hay purchased two of those strands, for the enormous sum of $100 – the equivalent of a few thousand dollars today. Still, a bargain. He had it enclosed in a ring, another common Victorian tradition.

In late 1865, John Hay, still in his twenties, held some modest posts abroad as secretary to various US legations. Returning to the U.S. in the early 1870s, he became a newspaper reporter, wrote a little, to some success, and married Clara Stone, the daughter of a bona-fide millionaire, who was happy to turn many of his business interests over to his son-in-law. It made Hay financially independent, and assured their children’s future. 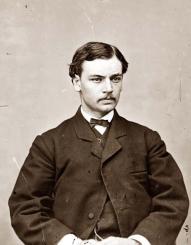 Robert Lincoln was a student at Harvard when he met Nicolay and Hay, but they became lifelong friends.

In the late 1870s, John Hay and John Nicolay began a decade-long task collaborating on an impressive 10-volume biography of Abraham Lincoln.  They were given rare access to Lincoln’s files and papers, now legally in the possession of Robert Lincoln. The volumes enjoyed limited popularity, but became the mainstay for two generations of Lincoln scholars.

One reader of the Nicolay-Hay work was 30-year-old Theodore Roosevelt, just embarking on a national political career. He was a huge admirer of the sixteenth president and wrote John Hay a complimentary fan letter.

Henry Adams, historian and author, would be another lifelong friend of John Hay.

Sometime during those years when he served in Lincoln’s White House, Hay became acquainted with a young man his age, with an excellent pedigree of his own. Henry Adams’ father, Charles Francis Adams was Lincoln’s ambassador to England. His grandfather and great-grandfather had both been Chief Occupants of the White House.

Hay and young Adams bonded instantly for a legendary friendship. But they both needed to go their separate ways and make their own marks. 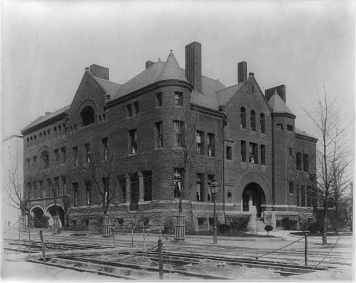 By the mid-1880s, Hay and Adams had renewed their friendship and had moved to Washington, DC, walking distance from the White House. Their intellectual compatibility attracted the A-listed elite of the capital to the salons in their adjoining town houses.

In 1889, a cyclone otherwise known as Theodore Roosevelt moved to Washington as a member of Republican President Benjamin Harrison’s new Civil Service Commission. The post was mid-level at best, as government posts go, but TR whipped it into his usual frenzy of importance.

Benjamin Harrison lost his bid for re-election, and TR took a hiatus back in New York for a few years. John Hay, who had always kept a finger in the political diplomatic pie-of-sorts, rekindled his statesman role and served as the Ambassador to England.

When William McKinley was elected President in 1896, the Republicans were back in the White House. John Hay was appointed Secretary State. Theodore Roosevelt was back in Washington, this time as Assistant Secretary of the Navy.

Hay and TR: The Lincoln Ring

John Hay always had a benevolent and somewhat paternal affection for TR, who was twenty years his junior. He and Adams would shake their heads in exasperation at Roosevelt’s frenetic pace and never-ending interests, but they always found him superb company. He was again welcome at the Hay-Adams salon. 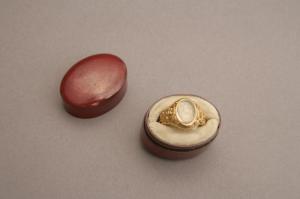 Hay was amazed. He was also invited to remain Secretary of State. While TR in many ways preferred his own statesmanship, he relied on Hay’s broad knowledge of foreign affairs, and his endless charm, wit, and uncommonly good common sense. They also spent many hours discussing Lincoln, the man they both admired over all others.

In 1905, when TR was inaugurated to a term of his own, Hay’s health was failing rapidly.   But he made an extraordinary offer: Would TR like to wear the Lincoln Ring at his inaugural? The President was dee-lighted to accept and wore the treasured ring.

Taliaferro, John – All the Great Prizes: The Life of John Hay from Lincoln to Roosevelt, Simon & Schuster, 2014 (Reprint)