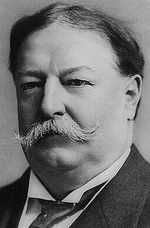 Every so often, dreams do come true. Even in politics

William Howard Taft (1857-1932) spent his entire life in public service: as judge, as Solicitor General, as Governor of the Philippines, as Cabinet member and as President – the only job he claimed to have disliked.

When he retired from the presidency in 1913, he was at loose ends, both personally and financially. The prominent Taft family of Cincinnati, Ohio had always encouraged its favorite son/brother – even to a point of augmenting his pre-presidential salary, which was comfortable, but never opulent.

In the nineteenth century, public servants, particularly those at a higher level (like a judge), were expected to contribute not only to the party that elected them, but to all the worthwhile civic causes: to wit, the old soldiers’ home, the opera house, the new library. They were also expected to attend all the see-and-be-seen events.

Mrs. Taft’s health curtailed most of her abilities to function publicly during Taft’s administration.

In 1913, there was no presidential pension, and “suitable” post-presidential paying jobs were limited. Taft still had a young son to be educated and a wife to care for. Nellie Taft, at 48, was only First Lady for a few months when she had a severe stroke. While she recovered substantially, incidents and relapses forced her to completely refocus her enormous energies on her health. Taft needed the paying job.

Taft’s beloved Yale, the family Alma mater, came to his rescue with the offer of a chair of law. “Judge” Taft was eminently qualified. A professorship at Yale was eminently suitable.  The position was prestigious; the work flexible and easy, and he sincerely enjoyed working with the young students. Taft also had plenty of time for the many speaking engagements that were coming his way. He was amazed that organizations paid $200 or more plus expenses, just to have him eat a chicken dinner and speak for an hour!

In 1915 President Woodrow Wilson appointed Taft to the National War Labor Relations Board.  The two men had gotten along well, and the new part-time position did not interfere with his Yale responsibilities.

It also allowed the Tafts to spend more time in Washington. Mrs. Taft disliked being cooped up in Connecticut, and missed her friends and activities in the capital.

Warren Harding (1860-1923) was also an Ohioan, but from central Ohio, and from an undistinguished family. As publisher of the Marion Star, he had gravitated easily into politics, mainly as a popular speaker at various organizations around the state. 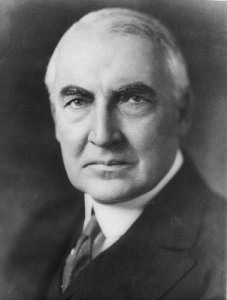 Senator Warren G. Harding, the man who looked like a president.

Blessed with the politician’s “glad hand” at the meet-and-greets, he was elected to the Ohio State Legislature, and served a term as Lt. Governor.

His personal connection with Taft-as-President had been casual and limited, even though as a former Lt. Governor, Harding had been invited to the massive gala 25th Wedding Anniversary party the Tafts hosted in 1911. (Since 8000 invitations were issued, the guest list was obviously not select.)

Harding repaid the courtesy by making a nominating speech for Taft’s re-election at the 1912 Republican convention. Taft won the party’s nomination, but lost the election big time!

Not long after William Howard Taft received his law degree, he was appointed to the bench and found his one true love. Being a judge suited his temperament, his disposition, his intellectual leanings and perhaps his outsized girth. A judge’s robe covers a lot of territory. The more he progressed in his career, the more he loved the bench, and his greatest ambition (which was never a secret) was an appointment to the Supreme Court. 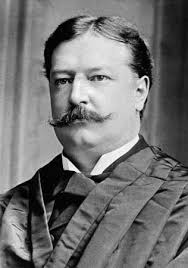 Young William Howard Taft became a judge early in his career, and never wavered in his love of the bench.

President Theodore Roosevelt offered him the post three times, and three times he declined – all for substantive reasons. It was a painful decision each time.

Even more privately painful was the odd coincidence that in his single four-year term, Taft appointed six justices to the Court – the most of any one-term president. In essence, he was handing over his lifelong dream to others – including the plum post of Chief Justice.

His chances were slipping away.

Handsome Warren Harding had made a solid name for himself throughout Ohio as a popular guest speaker. He loved “bloviating” as he called it, and was happy to help boost Republican colleagues in their election efforts.

Those benevolent chickens came to roost when Harding was elected to the US Senate in 1914.

He went to Washington and glad-handed and bloviated and boosted – this time on a national level. By 1920, while the country at large did not know the small-town newspaper publisher, Republican bigwigs did. He was everybody’s second or third or fourth choice for the nomination. He won that fairly easily.

Women voted for the first time, and liked his easy style and good looks. Harding won the presidency very easily.

Not long after his election, Harding invited ex-President Taft for a chat. The conversation covered many subjects, and eventually came around to the Supreme Court. 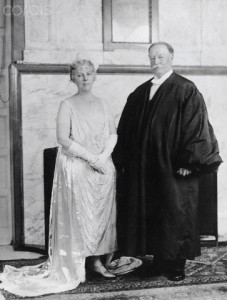 Chief Justice and Mrs. William Howard Taft. He was a happy man.

Harding admitted being aware of Taft’s desire for the bench; Taft, the always-honest man, admitted his lifelong dream, which by then was an open secret. But he also admitted that as a former President, he could only accept the position of Chief Justice. Three of the sitting justices had been his own appointments – including the Chief Justice himself.

Harding was understanding, but non-committal.

But Chief Justice Edward D. White was in failing health. Within the year, he died, and the seat was vacant. It would be a very short vacancy. President Harding made Taft  joyous by nominating him as Chief Justice of the Supreme Court. He was well past sixty, and had nearly given up all hope of his dream job. The Senate confirmed him unanimously the following day.  To this day, he is still the only man to serve as both President and Chief Justice.  It is said that Taft’s last ten years were his happiest.

2 Responses to Harding and Taft: Making An Old Man Happy