The Origin of “The Buck”

The saying, however, derives from a poker term (and HST was a long-time poker player). In the wild west days, a buckhorn was passed around the table, signifying whose turn it was.

Exactly when Harry Truman learned to play poker is always open to some conjecture, since historians are usually fastidious about documenting everything. He may have learned the game when he was an adolescent in Missouri. A deck of cards is cheap enough.

Captain Harry Truman in WWI. Most soldiers played cards when they had a little time.

In his twenties, he was known to play poker from time to time with some friends. In his thirties, as “Captain Harry” during the First World War, poker was likely on his agenda during soldierly down-time. Practically every soldier played cards then.

He married Bess Wallace when they were both in their middle thirties, and they made their home with her mother, Madge Wallace, a difficult woman on her best day. While it was not the ideal situation for either of the newlywed Trumans, they accepted their “responsibilities” as graciously as possible, and learned to adapt.

Part of the adapting was to find their social entertainment outside the house. Bess had some old school chums that she maintained for life. They played bridge a couple of times a week, rotating hosting duties.  Harry, on the other hand, played poker with the guys.  Out.

The Poker Games of Independence

Madge Wallace, HST’s “mother-in-law from hell,” according to his friends.

There were a bunch of fellows in and around Independence, Missouri, who struck a blow for their own independence by having a weekly guy-night: playing poker and enjoying a couple of drinks at one of the local hotels.

They came from all walks of midwestern life. Some were army buddies, some were local merchants, several were political-types, a few were farm boys come to town. Some were old pals that Truman had known since grammar school. The stakes were modest. Nickels and dimes. Nobody lost or won a great deal of money, but they had a good time and enjoyed each others’ company. Bess Truman, knowing that an evening at the Wallace-Truman home could be tedious, encouraged Harry to enjoy himself with the fellas. He never lost much money, and he never came home drunk.

When Harry Truman became active in politics, serving for several years as County Supervisor, his poker pals expanded to include more politicos. But the games themselves, despite the usual chatter about current events and the political goings-on, were always friendly and a source of relaxation.

The Poker Games of Washington 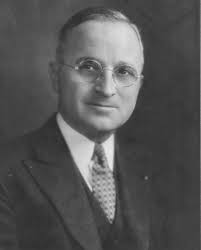 In 1934, Harry S Truman was elect to the U.S. Senate in a surprising upset. (Even he was surprised!) The first session saw him going to the Capital alone. Bess did not want to leave her mother, and their daughter Margaret was still a schoolchild.

Harry rented a small apartment, made friends, and was soon invited to a regular political poker game. Literally. He seemed to be good company and a pretty fair poker player. He maintained many of his card-playing buddies throughout his long life.

As an aside, both his predecessor FDR (fair) and successor Eisenhower (excellent) were poker players who enjoyed the game – but there is no indication Harry was invited to play at their tables.

Bess began to “visit” Senator Truman in Washington, and decided she liked it. Harry took a larger apartment (which also accommodated Mrs. Wallace), but his poker games continued. Bess, a pretty snappy bridge player herself, found like-minded Congressional wives and had regular games as well.

Bottom line. Playing cards was an important part of both Trumans’ social life, albeit sexually segregated.

Poker and the President

Few Presidents came to office with a more momentous agenda.

Few Presidents ever assumed office under more stress than Harry Truman, following the sudden death of Franklin Roosevelt, and World War II approaching mop-up stages. The momentous events that became a part of the Truman agenda were arguably some of the weightiest issues ever to face a President – particularly one who had little training for the position.

President HST had special poker chips made with the Presidential Seal.

Maintaining physical and emotional equilibrium is an important part of a President’s schedule – any President. Truman was no exception, and the sixty-year old chief executive was cognizant of his need for periodic relaxation. 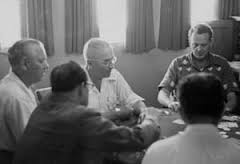 Time and weather permitting, a cruise down the Potomac on the Williamsburg, the Presidential yacht, was a leisure trip with the guys. (Mrs. T. did not care for boats.) He organized a bunch of his pals, stocked the galley with plenty of whiskey, snacks, a few decks of cards and a set of poker chips that featured the Presidential seal. The stakes were a little higher, but still considered relatively modest.

HST’s Little White House in Key West was one of his favorite places.

Then there were the marathon poker games in Florida. HST had discovered the pleasures of Key West, where deep-sea fishing, one of his other delights, was readily available. His Little White House was a modest place, fixed up to Secret Service snuff. It was another venue that Bess Truman did not care for, so the President usually made those visits into a giant stag-affair, and his favorite poker pals came along for the fun.

It is said some of those games lasted for days.

Poker and the Ex-President

The Trumans went back to Independence, Missouri in early 1953. Old Mrs. Wallace had died by then, and the house was finally the Truman house. Both Harry and Bess picked up the threads of their old life, reconnected with many of their old friends, and were commonly seen on the streets and in the shops of their home town.

Mrs. Truman resumed her 50-year bridge club. And Harry still periodically met a bunch of the guys to play poker.

1 Response to Harry Truman, Poker and The Buck Stops Here