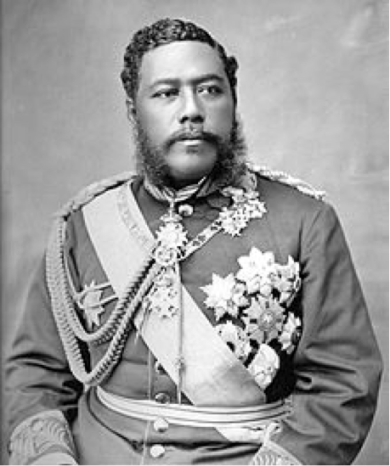 The first sovereign of a foreign country to be hosted at a White House State Dinner was the King of the Sandwich Islands – in 1874.

From the beginning of the United States as a nation, elegant dining was an essential practice. A little upstart country with even smaller claims to “culture” needed to prove itself equal (or almost equal) to the great countries of Europe, with centuries of history and tradition.

This does not mean that the US was backward or inhospitable. George and Martha Washington were wealthy Virginians, to whom elegance, taste and “southern hospitality” was natural. Their “official” presidential house on Cherry Street in New York City, albeit rented, was chosen specifically because its ballroom could accommodate a hundred people. 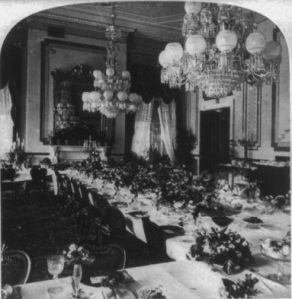 The White House State Dining Room, perhaps around the 1870s.

John and Abigail Adams were considered gracious hosts. Thomas Jefferson, the soul of elegance, preferred the “small” table, perhaps a dozen to twenty guests. But it was the charming First Lady Dolley Madison who put the White House on the map as a social Mecca, hosting not only intimate luncheons and suppers, but grand weekly soirees, for some 300 people.

“State” Dinners, however, were formal banquets for the highest level guests, and could be either large or small. The problem was that with 3,000 miles of ocean on one side, and 3,000 miles of unknown frontier on the other, not too many heads of state were coming for dinner. Thus, the few foreign diplomats dispatched to these upstart former-colonies, were welcomed like the visiting royalty they represented.

Ambassadors from Britain, France, Spain and other European countries, accustomed to pomp, ceremony and inviolable etiquette, were usually dismayed at the “democratic” tendencies of US dinner parties.

But mostly, the so-called “state” dinners of early Presidencies honored their own: Governors, Victorious Generals, the Supreme Court Justices, the Congress, and sometimes for former or incoming presidents.

The US Civil War as a Turning Point

Grand entertainment in Lincoln’s administration was curtailed due to Civil War; Andrew Johnson’s turbulent administration due to the President’s unpopularity. 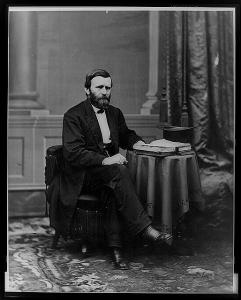 But when Ulysses S. Grant became President in 1869, the Gilded Age (a term coined by Mark Twain) had begun. Grant was likely the most popular man in the country. The economy was strong. There was money to be made, and a great many people were making it. Showing off wealth was fashionable. The more opulent the dress and decor, the more respect you were said to merit.

While the White House could never rival the true glitz of the Astors’ Fifth Avenue New York mansions, or the summer “cottages” of Newport’s Vanderbilts, the Presidential Mansion was still a nifty place to hold a party. Since both Ulysses and Julia Grant were affable people, the White House doors were flung wide for dinners and balls and receptions.

The King of the Sandwich Islands, a.k.a. Hawaii.

The Sandwich Islands, today known as Hawaii, was a practically-unknown atoll in the faraway Pacific, but it was a sovereign nation. It had its own government. It had its own king. During the American Civil War, it had become semi-important to the Union economy by supplying sugar.

In 1874, David Kalakaua (1836-1891) became King (actually the last King, but he did not know it at the time). It was a semi-elected accession, he being a collateral (rather than direct) descendant of the reigning monarch. But Kalakaua was a man of strong western influences, and the Sandwich Islands were suffering an economic depression. In order to bolster their economy by trade agreements, he embarked on an extensive goodwill tour, starting with the United States.

As a reigning monarch, Kalakaua was invited to the White House for the first “state dinner” given by an American President for a foreign head of state.  President Buchanan’s dinner for the Prince of Wales in 1860 does not count. The Prince was only eighteen, not a head of state, and supposedly traveling incognito (although nobody believed that for an instant), thus relieving the President from demanding protocol issues.

An artistic rendering of the first U.S. state dinner for a reigning monarch.

King Kalakaua was different. He was a reigning monarch, and expected to be acknowledged as such. He was pleasantly acquainted with Mark Twain, who had spent considerable time in Hawaii. Twain was also pleasantly acquainted with President Grant, a man he greatly admired. An introduction from Mark Twain (who Grant admired in return) was good enough for an invitation to dinner at the White House.

President and Mrs. Grant greeted the King cordially, and dinner was served at a small party: only thirty-six people were invited. It was said to have nearly thirty covers (separate dishes) of exotic French cuisine and the finest of wines. The menu included several choices of soup, fish, boiled meats, roasted meats, game entrees, vegetables, relishes, pastries and other desserts. And coffee. The cost of the affair was around $3000 – more than ten-times the amount today!

But the purpose of the visit (and the dinner) was well served – at least for King Kalakaua. He achieved his goal, and a duty-free agreement was reached between the Sandwich Islands and the USA for sugar, among other items. It was obviously mutually beneficial, since twenty years later, Hawaii (as it became called) chose to annex itself to the USA.

In 1881, King David Kalakaua made a round-the-world trip, and became the first ruling monarch of anywhere to do so. He again visited the US, met President Chester Alan Arthur, again to promote Hawaiian “culture” and again arranged reciprocal trade agreements.

As a one-man Chamber of Commerce, King Kalakaua could be considered a whopping success.

4 Responses to President Grant and the First State Dinner