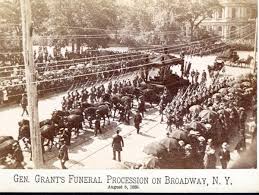 When General Ulysses S. Grant died in 1885, it was not a surprise. He had been ill for more than a year, and everyone knew it. 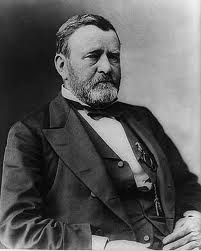 For a few years in the early 1880s, General Grant was a wealthy man.

In 1880, after an embarrassing semi-attempt at a third presidential term for President, an iconic Hero-General Ulysses S. Grant became a titular partner in a New York investment firm. Readily admitting his lack of knowledge about finances, he was assured that Ferdinand Ward, his whiz-kid partner, could handle that end. General Grant would be the famous “face” of the company. For a few years, all went well. Grant and his family became wealthy.

Then the bottom fell out of the tub. Ward was a scoundrel who had concocted a “borrow-from-Peter-to-Pay-Paul” scheme. The business collapsed in scandal, leaving General Grant holding the proverbial bag.

Innocent of any misdeeds other than poor judgement in choosing business partners, Grant vowed to make good on all the company’s debts – well into six figures! (Likely several million dollars, today.) He and his family were totally impoverished. He turned all his assets over to his creditors, including his Civil War memorabilia.

Within months of that plummet from fortune, he was diagnosed with terminal cancer of the throat…

…only nobody dared call anything “terminal” in the 1880s, and even long after. Doctors usually had a fair idea of the eventual nature of many fatal diseases, but cures and treatments were decades or more in the future. 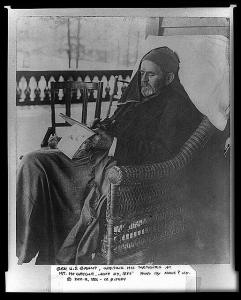 Rather than facing questions they could not answer, doctors found it much easier to offer patients and their loved ones hope and prayer, as opposed to grim tidings.

General Grant had been offered a huge royalty advance for writing his war memorials, something he had declined to do for years. Now, fearing that his family would be left in poverty and his good name tarnished, he agreed to the project. He pursued his “book” with the same tenacity he had projected during his military campaigns.

Doctors visited Grant daily, sometimes two or three doctors and sometimes two or three times a day. Despite his continually worsening pain, he refused all sedation or pain killers. He believed it would compromise his ability to think clearly. All he permitted was having his throat painted with cocaine to numb the local area.

Barely able to swallow solid foods, the General lost huge amounts of weight. His voice became little more than a painful whisper. Maybe the doctors believed in miracles, but Grant was a practical man. He knew better, and had no illusions. 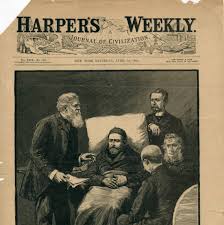 As his health continued to deteriorate, Grant began thinking of his burial wishes. As a two-term President, and perhaps more importantly, the victorious Civil War General, he knew his funeral arrangements would be a major event for the country.

He wrote a memo-to-himself, since he instinctively knew that facing the inevitable would upset his beloved wife and family. In the memo, he determined three choices for his burial site.

Grant’s family was with him during his last days.

One choice was Galena, IL. After Appomattox, Galena claimed Grant for its own. He was not born there, nor anywhere else in Illinois, and only lived there less than a year, working at a hated clerking job in his father’s tannery. But Galena is where his illustrious career was reborn, and Illinois was where he received his first “star.”

Another possible choice for burial was New York City, whose citizens had been so good to him when he needed it most.

But his first choice was West Point, where he was trained to the work he was to admirably fulfill. The Academy would gladly welcome his final resting place – but there was one insurmountable problem. They would not allow Julia Grant to rest beside him.

Julia Dent (1826-1901) was Grant’s one-and-only. He met her when he was 21, recently graduated from West Point. She was barely 18, and the sister of his Academy roommate. It was love at first sight for both of them, but marriage was four years away, punctuated by the Mexican War. 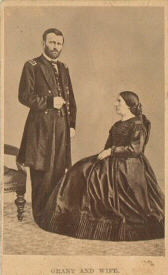 Julia had been through thick and thin with him, and the first half of their nearly 40 years together was decidedly thin. She never complained, loved him devotedly, and made a happy home for them and their four children wherever they were.

During the Civil War, Julia would write of being a nomad, a Penelope following her Ulysses whenever and wherever he asked. She knew him better than anyone, and in some ways, perhaps better than he knew himself.

Wherever he would rest forever, Julia must lie beside him. 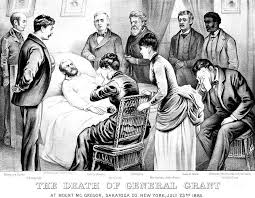 The Grant family was especially close.

It was not until shortly before he died in August, 1885, that General Grant showed that memo to his eldest son, Colonel Fred Grant. The General had been right: it was a difficult and upsetting subject, but it had to be faced. Fred assumed the responsibility.

West Point could/would not accept Julia and that was a deal breaker. Galena – or other Illinois sites – was perhaps too remote, and besides, Illinois “belonged” to Lincoln. New York it would be. They had sincerely loved him. And they could afford him. 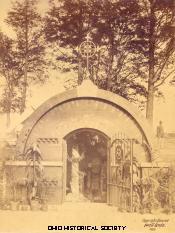 The temporary crypt for General Grant. 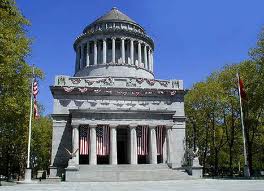 More than $600,000 was privately donated to construct a magnificent 150-foot high Tomb on New York’s Riverside Drive, overlooking the Hudson River. It was formally dedicated in 1897. 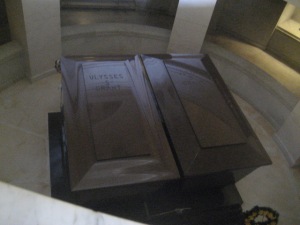 Four years later, according to Grant’s specific instructions, Julia Grant was brought to lay beside him, as she had done for nearly forty years.

Goldhurst, Richard – Many Are the Hearts – 1975, Reader’s Digest Press