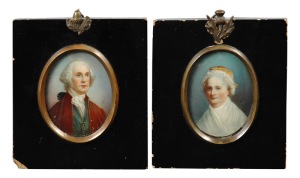 Martha Dandridge had married Daniel Custis when she was eighteen. Eight years later, he died, leaving his widow with a vast estate and two small babies, John (Jack) and Martha (Patsy). Two other babies had died in early childhood.

A little more than a year later, Martha married Col. George Washington of the Virginia militia. Her two children had no memory of their natural parent; Washington was always “Father.”

According to Virginia law, George Washington,  stepfather, became legal guardian to the children, and was an affectionate parent. 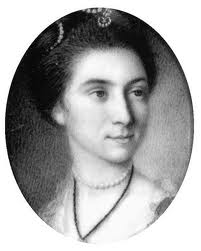 The only known likeness of young Martha (Patsy) Custis

The first documented instance of any health problems concerning little Patsy was when she was around five. GW’s papers indicated that she experienced “fits and fevers.” Even today, early childhood fevers and convulsions are not uncommon, albeit unquestionably unsettling for the parents. They are usually short-lived, with no long-term problem.

No other occurrence is documented about Patsy until she was about eleven, approaching puberty. The underlying cause is difficult to determine more than two centuries later, but needless to say, in the 1760s, medical science was unequipped to treat it.

Epileptic seizures have been around since Biblical times. Even then, it bore a stigma, but it appears that the Washingtons were not squeamish. They recognized and understood the nature of the problem, but it was intensely private, contained solely within the family circle.

Epileptic seizures can manifest in many different ways and in many varying degrees. Some episodes last only seconds and are barely noticeable – even to the patient. Some are fainting spells; some are half-conscious flailing about; some are rigidly frozen. Patsy’s episodes appear to have been severe, violent and fairly frequent.

Nevertheless, Patsy was a pleasant child and young woman. Her rare portraits depict a pretty young lady of poise and presence. She played the spinet. She sewed. She was accomplished at the minuet and reels. She maintained as “normal” a life as possible.

A wealthy young (i.e. marriageable) Virginia woman of sixteen, circa 1770, could look forward to some of her happiest years. It was a social time; parties and balls abounded. Patsy Custis, with breeding and money, would have had lovely gowns, jewelry and dancing shoes. With the Washington esteem and influence, invitations to the finest homes would have been forthcoming. Add to that her good looks and pleasant disposition, the likelihood that she would be popular is a fair assumption. She could look forward to a happy time of courtship, and hopefully, a kind and affectionate husband.

But it became obvious early on that it was not to be. Patsy could not have been oblivious to her fate. It likely devastated her devoted mother, who had enjoyed two happy marriages.

As affectionate and caring parents, George and Martha Washington consulted many physicians. They came from Alexandria, Fredericksburg and even Williamsburg, the Colonial capital, in the hope that something could be done to ease Patsy’s distress. One physician came from Baltimore at least ten times during a five year period.

Money was no object. They tried drops, “Nervous Powders” and potions, various drugs of herbs and barks, “a large Julep,” mercury and ether. They bled her, purged her, and took her to the medicinal waters at Warm Springs, Virginia. They even had a special iron ring made for her to wear, supposedly to prevent a seizure from happening.

Changes in her diet and lifestyle were suggested, including regular mild exercise and drinking barley water and eating cool food.Nothing seemed to work. On the contrary, her “fitts”, as they were called in Colonial times, increased in frequency and intensity as time went on.

In the summer of 1770, George Washington kept a private and discrete record of those occurrences in his almanac. Over a period of 86 days, Patsy suffered episodes on 26 days – sometimes twice in a single day.

Eighteen-year-old Jack Custis, being tutored in Annapolis  attended a party in 1773, met 15-year-old Nelly Calvert and was enchanted. The feelings were mutual, and they became engaged a short time later.

George Washington was reluctant, since he planned to send his stepson to Kings College (now Columbia University) in New York. Jack was always a lazy student, disinclined toward scholarship, but Washington still held lingering hopes. However, once he met the Calverts (who he liked) and the charming Nelly, he too was enchanted and  agreed to the engagement, on the condition that Jack at least try a few months at Kings College. He also suggested that Nelly visit Mount Vernon.

She arrived only days before Patsy’s unforeseen death. The two young women bonded immediately, to the delight of Martha Washington. Her daughter’s health had deeply curtailed her activity, so any diversion and friendship was warmly welcomed. Patsy seemed happier than she had been in months.

In midafternoon of June 19, 1773, Patsy went upstairs to get a letter from her brother Jack in New York, when Nelly heard a strange noise. Running to investigate, she found Patsy on the floor in the throes of a severe seizure. The Washingtons came immediately and carried their poor daughter to bed. She never recovered, nor made a sound.

“Without a word, a groan or scarce a sigh.”

Martha Washington was devastated. Now three of her four children were gone. Despite knowing the Washingtons for such a short time, Nelly Calvert stepped into the breach left by a daughter, and was sincerely devoted to the grieving parents. When she married Jack not long thereafter, she became their daughter, and even as a remarried widow years later, remained their daughter as long as George and Martha Washington lived.

A Cryptic Record of a Family Tragedy: The Unhappy Progression of Patsy Custis’s Epilepsy