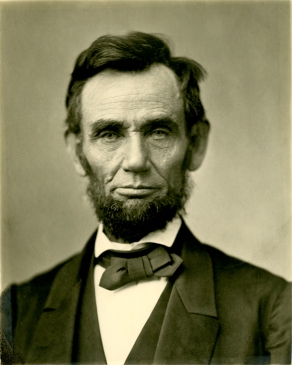 Abraham Lincoln suffered from variola (smallpox) when he was in the White House.

Almost as an afterthought, President Lincoln had been invited to make “a few appropriate remarks” at an event in Gettysburg, Pennsylvania.

In July, a massive three-day battle had been fought at the tiny town of Gettysburg. Thousands of soldiers, North and South had died. Thousands more had been injured.

The only known photo of Lincoln at Gettysburg.

Pennsylvania Governor Andrew Curtin, a Republican, mounted a vigorous campaign to make part of that battlefield into a national cemetery. The effort was enthusiastically supported, and on November 19, the dedication ceremony for the sobering memorial was scheduled. Former Congressman Edward Everett, considered the country’s premier orator, had accepted Curtin’s invitation to be the keynote speaker. As a courtesy, an invitation for the President to be on the program was issued – nothing more.

Abraham Lincoln considered himself a healthy and normal child-to-man. He was strong, grew rapidly, and if he suffered the usual youthful illnesses, they were mild enough, and he recovered with no visible after effect. It wasn’t until his young manhood that there is any evidence of health-related issues, notably a case of gonorrhea (he erroneously believed was syphilis) contracted on a trip to New Orleans.

His most reported health issues were periodic incidences of “the hypo” or hypochondria, which, according to medical posterity, were more a bout of general depression, coupled with malaise or inertia. It recurred at intervals throughout his life – only as President, Lincoln did not have the luxury of feeling “hypochondriacal.”

During his four years in the White House, he worked incredibly long hours, was under enormous stress and came into contact with literally thousands of people from various places and walks of life. That he didn’t feel well from time to time is a given – and is also fairly well documented. His secretaries, who also worked long hours and met thousands of people were also unwell periodically. But for Lincoln, those “illnesses” appear to have been relatively minor, and did not cause him to lose much time from his work.

There is some vagueness about when Abraham Lincoln first showed his symptoms. Some sources claim Lincoln had been ill prior to Gettysburg. Shortly before the dedication ceremony, his ten-year-old son Tad was sick and feverish. The doctors were not sure of the exact illness (children have many), but having already lost two sons, both Lincolns were seriously concerned. Nevertheless, Tad was recovering, Lincoln had accepted the invitation, and kept the commitment, believing it was incumbent upon him to be a part of hallowing the ground.

Variola is a mild form of smallpox, just as contagious, but perhaps not as deadly or disfiguring. The symptoms mimic the usual aches, fevers and general malaise of many other ailments, but within days, a rash or blotches that form blisters and scabs is its most distinguishing feature.

By the 1860s, inoculation for the dreaded pox was fairly commonplace. It was so highly contagious that Union soldiers were routinely inoculated upon entering the Army. But Lincoln had never been inoculated, and was exposed to literally thousands of people who thronged in the White House for a few minutes of the President’s time.

Most sources today claim he was incubating the illness at Gettysburg, but it didn’t manifest until AFTER he returned to the White House.

What is consistent, however, was that his illness coincided with the Gettysburg dedication ceremony, and the fact that he was not feeling well when he went. By the time he returned to the White House, he was definitely ill, feverish and complaining of body aches. He took to his bed. His valet, William Johnson, was also ailing and immediately sent to his rooms. The White House physician was summoned. Within a few days, the telltale rash and pustules began to form.

There is also some speculation that Lincoln had smallpox, period. Variola, being a mild form of the disease was only admitted (and publicized) to lessen the effect of the President being seriously ill. (It may also be speculated that a “lesser form” might ease the anxieties of Mary Lincoln.)

Both John G. Nicolay and John Hay, the President’s private secretaries, were visibly upset that Lincoln might die. Smallpox was a killer. The mortality rate for those who contracted it, still hovered at 30%. William Johnson was one of those victims.

According to William Stoddard, an assistant White House secretary (whose diaries and books are a mainstay of Lincoln White House scholars) all members of the White House household, staff and family (i.e. Mary and Tad) who had never been inoculated, were immediately treated appropriately.

President Lincoln remained in his rooms for several weeks after he returned from Gettysburg. It was a well-known fact that smallpox, light case or not, was highly communicable, and thus strict quarantine procedures were enforced. People who either had a case of smallpox, or who had been inoculated were immune, however. Records show that Lincoln did not return to his office until shortly before Christmas. By that time, the scabs from his rash and blisters had abated, and he did not appear to have any visible facial scarring.

The President, who was constantly besieged by people of all stations who wanted offices or favors or clemency, or merely just to shake his hand, now quipped to his doctor once he felt better, that “now I have something that I can give to everybody.”

According to Lincoln himself, however, there was definitely an outbreak of smallpox in Washington in late 1863 through early 1864. He sent a wire to his son Robert, at Harvard, warning him and his friends not to come to the Capital because of the outbreak.  By that time, the President was fine.

But sick or well, he made a dandy speech at Gettysburg.

Conroy,James B. – Lincoln’s White House: The People’s House in Wartime – Rowman and Littlefield, 2016

1 Response to Abraham Lincoln and Smallpox