…with a little help from President Lincoln. Maybe.

Ohio born James Garfield (1831-81) had a very unpromising start in life. His father died when he was two, with little to leave the family.  His mother later had a disastrous remarriage (and divorce), and despite his academic abilities, James was a wild boy, and difficult to manage. He needed some good male-mentoring.

The good part was, that the elders of a small evangelical sect called the Disciples of Christ took an interest in the boy, who was bright and strong, personable and promising, but who definitely needed guidance and direction. They were happy to provide it. 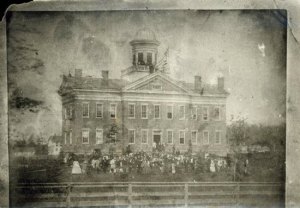 An early photo of Hiram College.

By the time Garfield had graduated Geauga Academy (high school), he was ordained as a minister, and even preached a sermon. Then he went on to tiny Hiram College (now part of Case-Western Reserve), worked his way through as a janitor, and blazed through his studies. The elders believed he was “the future of the school” and sent him to Williams College in Massachusetts (selected mainly because there was an active Disciples community nearby to keep young James on the straight and narrow). 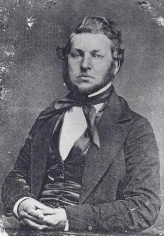 Educating Garfield was worth the effort.

Once again, he did splendidly, graduated with honors, returned to Hiram College and began teaching. In short shrift, he was made President of the College. But he had become interested in politics and decided that a legal education would be most helpful. So he read law with a Cleveland firm, and passed the Ohio bar.

Such success and such strong backing from the town made Garfield a well known figure in the district, and he was quickly elected to the Ohio state senate. He went to Columbus.

Bottom line: James Garfield was a qualified preacher, teacher and lawyer – and never made a living at any of it.

Garfield had every intention and desire to pursue the law, but it was early 1861, a succession of Southern states had seceded, and the Civil War was underway in earnest. Not yet thirty, he tried to join the army right after the attack on Ft. Sumter, but Ohio Governor Dennison persuaded him to make a series of speeches throughout Ohio to encourage enlistments instead. 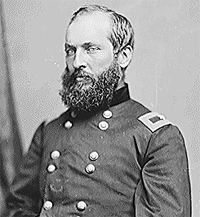 Garfield was an excellent officer.

By August, 1861, the Governor offered him a commission as Colonel of the 42nd Ohio, and he recruited a great many of his friends, neighbors and former students to join the regiment. By December, they had been assembled and trained, and joined General Don Carlos Buell’s Brigade in Kentucky.

Garfield took to the Army just as readily as he took to his academic and political life. He fought at Shiloh, and later in Chattanooga and Chickamauga and came to the attention of his superiors. He was promoted to Brigadier General, and within a year, to Major General – the youngest Major General in the Union Army.

And The Story Goes…

(Actually the “story” part is a really good one!)

According to lore, Garfield’s reputation was so stellar that some of his townsmen, unbeknownst to him, nominated and elected him to Congress – in absentia.

A surprised Garfield is said to have written to the district that elected him, that while he appreciated the honor, he wished to decline and retain his commission, since his duty was to his men. The story continues that the political bigwigs in his election district forwarded his letter to President Abraham Lincoln.

The President had some slight knowledge of the young General (likely through the dispatches sent to Secretary of War Edwin Stanton), and the consensus among the military was that Garfield was a fine officer – and a keeper! And in 1862-3, Lincoln was in dire need of good generals – but…..

Lincoln was also a fine politician, and the political necessities of 1862-3 were frequently as important (if not more important) as the military ones. He is said to have written Garfield a personal letter to the effect that while he commended the General’s desire to remain with his command, he could make all the Generals he wanted with a stroke of his pen. But what he really needed was a good Republican Congressman from Ohio.

He asked Garfield to reconsider.

The story may in fact be apocryphal, particularly since the subsequent relationship between Lincoln and Garfield would always be inconsequential. Nevertheless, it has been widely repeated for 150 years.

Lore, of course, is usually based on some snippets of true… Shortly after Chickamauga, Garfield had become ill and was sent home to recuperate. His Ohio friends and neighbors encouraged him to run for Congress, but he was ambivalent.

True: Much as he liked politics, he had grown to like the Army too, and believed it was his duty to remain with his command. He also did not want to resign his commission. 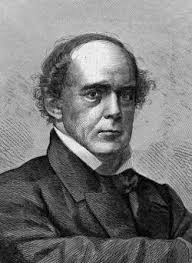 Salmon P. Chase would become a close friend to Garfield.

True: He did no campaigning. But he did not dissuade his local supporters from trying. They tried, they succeeded, and Garfield was elected in absentia as a member of Congress.

Aha… He was also sent to Washington for additional “convalescence,” and became close friends with former Ohio Governor (and Secretary of Treasury) Salmon P. Chase. It is likely that Chase may have introduced the young General to the President.

Hmmm. The “making Generals” statement of Lincoln was definitely used however, when Moseby’s raiders killed a General in a surprise Confederate raid, and confiscated a couple of dozen horses. This time Lincoln was known to say that he could make Generals but couldn’t make a horse. Sometimes stories and quotes and good metaphors get bandied around loosely….

But happily for Garfield’s ambivalence (which was genuine), he had been elected to Congress in September of 1862 – but would not be required to take his seat until November, 1863 – more than a year later!  He could and did, for all intents and purposes, have his cake and eat it too.