Posted on December 3, 2019 by Feather Foster

The Marquis de Lafayette was only nineteen when he was appointed Major General in the American Continental Army.

The Marquis: A Quick Background:

The Marquis Gilbert (with a pile of middle names) de Lafayette (1757-1834) was one of the wealthiest noblemen in France, orphaned early in life, and raised as a ward of the King. As such, he was well educated, including military training.

While still in his teens, he was infected by a passionate love of American independence. He outfitted his own ship, recruited a contingent of soldiers at his own expense, and sailed to America to volunteer. Arriving in Philadelphia in 1777, the 19-year-old Frenchman announced his “availability to Congress.” When he also advised that he and his men were volunteering and expected no pay, Congress was impressed enough to send him to General George Washington in Massachusetts.

It is assumed that Washington may have been surprised by his young “General,” but it did not take him long to recognize that the Marquis was indeed well trained, an excellent soldier, with a quick understanding of military command. By the time Cornwallis surrendered at Yorktown, Lafayette had become invaluable to the cause, and would forever be a hero to his American comrades.

The young Lafayette a little older.

He returned to France, but the ensuing years of the French Revolution, the “Terror”, Napoleon et al, were not particularly kind to him.

President James Monroe and the Marquis, both close in age, had been comrades in arms during the Revolution. Later in their lives, when Monroe served in diplomatic posts in France, they renewed their old friendship and indeed became very close. In 1824, now-President Monroe invited Lafayette to visit the United States, soon to celebrate its 50th anniversary as a nation.

Lafayette was happy to accept, and the country was overjoyed to welcome its favorite “adopted son” and rolled out the red carpet in all 24 states. The Marquis was honored in every one of them.

Citizen Lafayette – in his middle sixties.

Visiting each state, and many of the old battlefields he had seen decades earlier, was only a part of his sentimental journey. His old Commander-in-Chief, George Washington had been dead for nearly a quarter century, but other US Presidents were on hand to welcome their old and very dear friend.

John Adams, nearly ninety, had known Lafayette briefly during the Revolutionary War, and better as a diplomat to France in the 1780s. Old enough to be the Marquis’ father, Adams was in failing health, but sound in mind. They embraced warmly, although both could not help but marvel how the other had “aged.” John Quincy Adams was currently Secretary of State (under Monroe), and soon to be elected President in his own right. JQA had known Lafayette in Paris – when young Adams was a teenager.

Lafayette’s visit to Monticello to see an aging Thomas Jefferson was equally poignant. The two men had worked closely in Paris, in the run-up years to the French Revolution. The Marquis was an important Frenchman at the time, and Jefferson helped him draft the French Declaration of The Rights of Man. Their minds as well as their hearts were in tune, and the Sage of Monticello was delighted to escort the Frenchman around his beloved plantation – and his equally beloved University of Virginia.

While the tearful-but-joyous occasion between Lafayette and Jefferson also brought tears to the dozens of people come to witness the momentous reunion, arguably the most heartfelt visit was the Marquis’ journey to Mount Vernon, along with his son George Washington Lafayette, the namesake and godson of the Great General.

Lafayette-the-orphan, despite his enormous wealth, was understandably in need of a father figure, which he found in the person of his commanding officer, George Washington. The older, and colder Washington eventually melted in the warmth of Lafayette’s youthful charm and Gallic exuberance. His military ability and diplomatic skills won over his commander completely. Washington, with no children of his own blood, grew to love the Frenchman as a son he never had; to Lafayette, Washington was the father he never had. When the French “troubles” came, his son, George Washington Lafayette, was sent to live with President Washington, his godfather.

Both Lafayettes spent time and tears at Washington’s Mount Vernon grave, laying wreaths and reliving fond memories. They also visited Arlington, the home of George Washington Parke Custis, Washington’s step-grandson, who was an infant at the time of Lafayette’s victory in Yorktown.

Once the personal and private reunions were commemorated, Lafayette went on to visit all the states, which included eleven that had not existed when the Marquis first set foot in the US.

Every state welcomed him with parades and banquets, testimonials and honors of appreciation for all the Frenchman had done to help the US become its own country.

By this time, while the Marquis was still a reasonably wealthy man (by any standards), his fortune had been depleted substantially by more than thirty years of volatility in France. Many states presented him with large plots of land, hoping to tempt him to make America his permanent home. 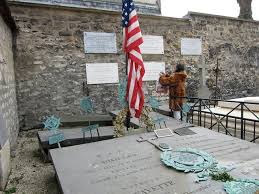 Lafayette Park, across the road from the White House, is named him. The first city named in his honor (1824), and one he actually visited, was Fayetteville, North Carolina. Nine counties have been named for him, plus dozens of towns and cities, streets, schools, parks and related places of interest.

When France was threatened by World War I, even before the US became a participant, volunteer US airmen joined the Lafayette Escadrille, (part of the French Air Service,) with their famous quote, “Lafayette, we are here.”

His US honors far outnumber any memorials to him in his native country. But when Lafayette returned from his 1824-5 visit, he brought back a small container of dirt, with the express wish that he be buried, at least in part, on American soil.