Washington: The Summer of 1814

Whether he wanted it or not, President James Madison found himself embroiled in the War of 1812, in essence, the “second” war of independence from Great Britain.  England had been committing serious outrages on American shipping, impressing American sailors, and a host of other “crimes” that were enraging the populace. Armies were raised and English soldiers were once again poised to reclaim their erstwhile colonies. 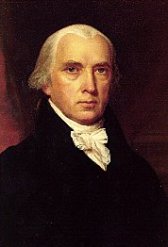 Two years after hostilities began, the “war” was still being fought, and was coming dangerously close to Washington City itself. Things did not bode well.

The decidedly un-warlike sixty-three-year-old President Madison believed it was his duty to follow the lead of George Washington, and assume personal command of the army. He mounted his horse, and rode off toward Baltimore, less than a hundred miles from Washington.

Prior to that decision, he and his wife Dolley had taken precautions to protect the physical treasures of the White House. They packed the important documents (before the National Archives, those papers were entrusted to the President), as well as the silver and other items of value, and sent them to places of safety.

One of the earliest images of the  White House

Madison further instructed his wife to remain in the White House until further notice. Believing evacuation was indeed inevitable, they arranged to meet at a friend’s home, several miles away in Virginia – once he sent word. Then he left for Maryland.

From the time Dolley Madison first came to Washington in 1801, when the widowed Thomas Jefferson became President, she became its social leader. As wife of Secretary of State Madison, their house was open for luncheons, teas, receptions, dinners and suppers nearly every day. She had a naturally gregarious disposition and a warmth that assured hospitality to all guests.

When she became First Lady in 1809, hosting was magnified several times over in the White House. All officialdom – as well as visitors to the capital city – were welcome at her Wednesday Evening Soirées. No invitations needed. Just come!

On August 24, 1814, the day after Madison left for Baltimore, a luncheon was scheduled at the White House. The table had been set; food had been prepared. Nevertheless the tone was ominous, and residents (official and otherwise) were vacating in droves. Several sent servants to the White House with “regrets;” they would not be able to attend lunch. Some of the Madisons’ close friends sent a carriage and driver, urging Mrs. M. to join them.

Meanwhile, a concerned (but never panicky) Dolley Madison ran up and down the stairs to the White House roof every hour, looking through her spyglass down the road to Baltimore, hoping to see either her husband – or his messenger. She had checked and re-checked all the valuables that could be carried away – including the painting of George Washington that had been cut from its fame and entrusted to some passing merchants from New York.

The famous portrait of George Washington by Gilbert Stuart.

Finally word came for Dolley to leave the White House, and proceed to their appointed meeting place. Her carriage and driver was waiting; her personal satchel was packed. They left.

Not long afterwards, British soldiers marched into Washington, and proceeded to torch the White House, and other federal buildings. En route, Dolley could look back and see red skies above a burning structure.

And The Rains Came

Providence, in the form of a hurricane (or at least a mega-storm) came later that day to quench the fire.

Having crossed the Potomac into Virginia, Dolley was spared the wrath or indignity of facing British soldiers – but not the wrath of God. The carriage and driver were pelted and soaked by the drenching rains, and nightfall impaired their view and bearings. They were lost.

The story continues (and there are several versions, by the way), that sometime later, as night had fallen, they spied a small farmhouse. Smoke from the chimney indicated it was occupied. Dolley’s soaking wet coachman knocked at the door and asked the woman if she might give some shelter to “his lady,” who was in the carriage.

The rains came – hard and furiously!

The farmer’s wife agreed, and wet, tired, and likely disheveled Dolley was escorted inside, and invited to warm herself by the fire, and have a cup of  hot coffee. The grateful First Lady was happy to accept the hospitality. The two women spent a pleasant hour chatting away like old friends.

The Eviction of Dolley

After a time, the farmer’s wife introduced herself, and asked the name of her newfound friend. Dolley admitted that she was Mrs. Madison. “The Mrs. Madison that everyone is talking about?” asked the stunned farm wife. “I suppose so,” replied the FLOTUS.

The farmer’s wife became indignant. Obviously times had been tough for her, what with the war. She went on to complain vociferously that Mrs. Madison’s husband had HER husband out fighting instead of farming, leaving HER to muddle by the best she could – and she would not offer Mrs. Madison the hospitality of HER house!

She handed Dolley her wet cloak and sent her away. It is likely the only time that the popular Mrs. M. was asked to leave!

In due time, Dolley and her coachman found their way again and arrived at their “safe house,” to meet up with the President. It is said that when she told her husband of her run-in with the farmer’s wife, they both had a good laugh about it.