Lucretia Garfield: The Rough Road to a Happy Marriage

When the Garfields became First Couple in 1880, they had a solid and happy marriage, but…

When James Garfield and Lucretia Rudolph married in 1858, they were both twenty-seven – and had been engaged for five years. 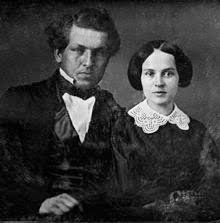 An early photo of young James and Lucretia Garfield

Both came from the “Western Reserve” part of Ohio, not far from Cleveland and Lake Erie. Both came from families of very modest means. Both were raised on farms rather than towns, and both were part of the Disciples of Christ evangelistic faith. Then there were the differences. James was only two when his father died, and his mother raised him and his three elder siblings alone. But James was an outgoing and warm-hearted fellow, and surprisingly smart academically. He grew to be a strapping young man – about six feet tall, two hundred pounds. With steel blue eyes.

Lucretia, or “Crete” as she was called by family, was petite, with a delicate figure that would never desert her – not even after seven children! She was introverted, raised by a family devoid of emotion or demonstrative affection. She would later write, “I do not think I was born for constant caresses, and surely no education of my childhood taught me to need them.” Education, on the other hand, was strongly encouraged – even to girls – and Crete had good mind for it.

She first met James Garfield when they were both around sixteen and attended the local Geauga Seminary.

Crete’s father, an elder with the Disciples of Christ, was instrumental in founding the Western Reserve Eclectic Institute (later to be called Hiram College, and still later to be part of Case-Western Reserve). His daughter was duly enrolled, and studied a classical education, which included French and literature. It suited her, and equipped her well for becoming a school teacher, which she eventually became.

James Garfield also attended the Eclectic, studying a more rigorous curriculum of Latin, Greek, sciences, mathematics and plenty of religion. He excelled, seriously considered the ministry as a profession, and was ordained and preached a sermon by the time he was twenty. He was also so prolific in his studies that he student-taught a few classes and was popular.

By 1853, it was noticeable that he was paying marked attention to Miss Rudolph. Their courtship progressed, and they considered themselves “affianced.” Sort of.

But the elders of the Church and the Eclectic believed that Garfield was “their future,” and thus deserving of a better education than their little college could provide. They arranged to send him to Williams College in Massachusetts, where there happened to be a large community of Disciples, to keep him on the straight and narrow.

The years Garfield spent at Williams College were seminal to him in many ways. He and Crete corresponded steadily, but his “straight and narrow” had a few bends and detours in the road. He became acquainted with other young ladies, one of whom seems to have been a more serious acquaintance. But the gals in his circle were apprised of his “engagement” and considered Crete as their “sister.” Garfield also became interested in politics, and was an ardent supporter of abolition.

Since Massachusetts was several hundred miles from the Western Reserve, he did not come back for vacations. Crete went there once in 1855, and then again for his commencement in 1856.

By that time, their relationship was somewhat strained, and Garfield suspected that Crete did not really “love” him. She felt neglected by a fiancée who spent little time with her. Undemonstrative like her family, the story goes that she was unable to convey her feelings verbally, but permitted Garfield to read a few select pages in her diary, where she admitted to her deep feelings. They finally married in November, 1858.

Separations of the Heart and Body 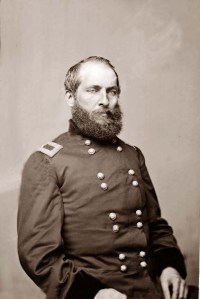 Meanwhile, Garfield was steadily progressing in his career. He became principal and then president of the Eclectic, but discovering a better stepping stone to fame and fortune, began to read law. Then he was elected to the State Legislature, and spent much of his time in Columbus. And, despite their first child, born in 1860, he was as neglectful of his wife as he had been of his fiancée.

In 1861, when the Civil War began, Garfield entered the Union Army, and eventually became a Major General. There was another long separation. Then, in absentia, he was elected to Congress, but Since he did not need to take his seat until late 1863, he remained in the Army.

For a while, he was assigned to Washington, DC, and stayed with Secretary of the Treasury Samuel P. Chase – a former Ohio Governor. Garfield soon attracted attention by squiring his lovely daughter Kate to various social events. Then, on a trip to New York, he engaged in a brief romance. Crete found out, and her errant husband confessed all to his patient, and very forgiving wife.

Meanwhile, she was obviously disappointed and lonely, and wrote him in 1863, that after five years of marriage, they had only spent twenty weeks together – and offered him a separation, if he chose.

The Ties That Bound

In 1863, three-year-old Eliza Garfield died of diphtheria. Both parents were devastated, and it is believed that their shared grief allowed Crete to respond to her husband in ways she had never been able to do before. She would write to him, “…our love has been made so perfect through this great suffering.” 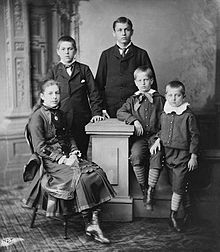 Crete began visiting him in Washington, but still felt disconnected. Finally, after living apart so much, and after his Congressional seat was secure, they built a house in Washington, and eventually had five more children (A sixth died in infancy.)

Whether Garfield chose to repair his precarious marriage because it would reflect poorly on his political future is undocumented. Nevertheless, the couple found common bonds in their scholarly pursuits, delighted in their children, joined several Washington literary clubs, attended the theater frequently…and in other words, became a strong and loving family till death did they part.

President Garfield was assassinated in 1881. She survived him by nearly forty years.