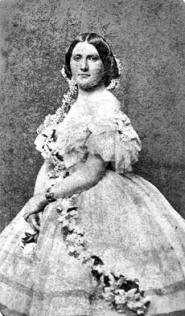 Harriet Lane, bachelor President Buchanan’s niece, was a popular hostess in the late 1850s. She had been presented to Queen Victoria – a gold star on anyone’s social resume.

Thirty year old Harriet Lane enjoyed a hugely popular tenure as de facto First Lady in the late 1850s. Her social leadership was as successful as her Uncle James Buchanan’s political administration was a flop. When First Lady-to-be Mary Lincoln arrived in Washington, she had a hard act to follow.

Many people believed that Kentucky bred-Illinois wed Mary was a Southern sympathizer. Perhaps an actual spy. She wasn’t. 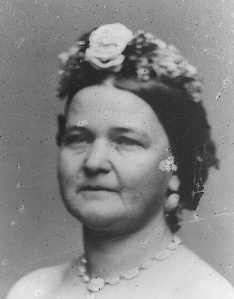 Mary Lincoln arrived in Washington in 1861, fully convinced that she was equal to the task of being the social leader of the country.

Washington society women were dismissive of her “taste” and “culture,” believing that she was as humbly born as Lincoln. She wasn’t that either.  A contingent of somewhat smarmy Congressional wives called on her prior to the inauguration to offer their “assistance” in helping her over the societal shoals, as it were. Smarmy yes, but they meant no harm. Mary Lincoln, offended at the inference that she wasn’t up to snuff, let them know it. The “advisory committee” left in a huff, and seldom if ever attended her receptions. They were content to host their own lavish salons and snipe at the First Lady.

Kate Chase was the uber-snotty, cultured and sophisticated twentyish daughter of Treasury Secretary Salmon P. Chase. She was everything Mary was not: young, tall, slender, pretty, cosmopolitan, rich and very smart.

When she met Mrs. Lincoln, shortly after the inauguration, the First Lady greeted her pleasantly and invited Kate to call again. Kate then insinuated that Mary would be welcome to call on her. Kate knew better – and so did Mary. It was the supreme gaffe. First Ladies only receive; they do not pay calls. Kate Chase immediately took first place at the top of Mrs. Lincoln’s antipathy list.

Salmon P. Chase, a former Governor of Ohio, had had a decade of political leadership as an ardent abolitionist. Thrice widowed to pretty women who died young, he lavished his affections and considerable wealth on Kate, who was thrilled to take an important role as his escort and hostess. Her salons were attended by the crème of society. Chase desperately wanted to be President, and even as a cabinet secretary, plotted to head the Republican ticket in 1864. Kate was determined to further that goal with every social skill she possessed. That alone was enough to antagonize Mrs. Lincoln.

In early 1862, the Lincoln’s 12-year-old son died, and Mary went into deep mourning. In addition to her intense grief, the proprieties of mourning were strict, and Mrs. Lincoln’s role as society leader was on hold for over a year. Miss Chase was delighted to pick up that slack, and the Chase mansion became the mecca of social Washington – particularly among those who were not thrilled with Lincoln.

Kate married in 1863.  The groom was William Sprague, a nasty drinker, philanderer and “political general” via being the Governor of Rhode Island. But Sprague had an immense fortune, and the Chase funds were running low. Kate willingly bartered her marital happiness (and she would be very unhappy) for the Sprague infusion of money for her father’s presidential ambitions.

Mary positively loathed Kate (the aversion was mutual), and refused to attend the wedding. Lincoln went alone, pleading the First Lady’s ubiquitous “unwellness.” Mary had her faults, but hypocrisy was not one of them. She couldn’t stand the bride, and couldn’t force the smile.

Then, of course, there was the time the Lincolns were hosting a large diplomatic dinner and Mary deliberately scratched Chase-and-daughter from the guest list. It created such a protocol furor that Lincoln personally had to override the insult and scratch their names back in.

The beauteous Kate was Mary Lincoln’s chief rival for nearly four years, but in 1864 there appeared another, even more formidable. This rival, however, was nothing like Kate Chase. She was fortyish, plain as a post, rather dumpy and unfashionable, not overly smart or politically savvy, and positively clueless that she was a social contender. 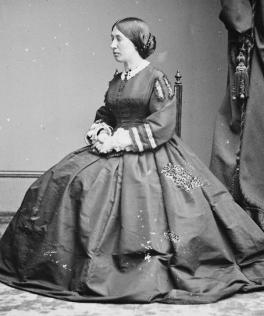 Julia Grant, the plain and dowdy wife of Ulysses S. Grant, would be given a complete makeover by the social-minded Congressional wives.

Julia Grant, mother of four like Mary, was the homey and homely wife of Ulysses S. Grant, now General of the Army, and next to Lincoln, the most important man in the Union. He was as unpolitically inclined as his wife, but they were both willing to learn.

The same society matrons who had incurred Mrs. Lincoln’s wrath in 1861 were quick to flock to Mrs. General Grant in 1864, and offer her that same assistance in navigating the socio-political waters of Washington. Julia, a genuinely nice lady, appreciated the offer and attention – and probably realized she could use the help.   She became very popular, mainly because so few (other than Mary Lincoln) saw her as a threat to anything. The Grants became the honored guests at everyone’s soirees – and they went as often as Grant was available.

The only time Mrs. Lincoln and Mrs. Grant actually spent time in each others’ company, Mrs. L. was on her absolutely worst behavior, accusing Mrs. G. of “waiting in the wings” and wanting to be in her place. Poor Julia didn’t know what hit her. All she did know, is that she did not wish to be in Mrs. Lincoln’s company again, a situation tragically fulfilled by Lincoln’s assassination only days later.

Mary Lincoln would have no more rivals. Her place as widow of our martyred president was singular and unenviable. No one wanted to be in her place ever again.