Tom and Dolley: The Original Ben and Jerry

Ice cream has always been one of America’s favorite desserts. But was it Thomas Jefferson or Dolley Madison who deserves the credit?

Ice cream has been one of America’s favorite desserts for more than 200 years.

Many people believe that “Dolly Madison” ice cream is named for the First Lady because she invented ice cream.

Wrong.   She did not invent ice cream.  It is actually an ancient recipe.

Many others believe that it was because Dolley Madison (note the “e” in the correct spelling) introduced ice cream at the White House.

Wrong again. She did not introduce it.

What she did, however, was to popularize our country’s favorite dessert to this day.

Thomas Jefferson usually gets credit for bring the “receipt” for ice cream to the US. It originated in France.

But the story goes that it was actually Thomas Jefferson, a cosmopolitan and sophisticated man with an undeniably epicurean palate, who discovered the delectable confectionary treat in Paris, (where else would it be possible?) where he lived for several years during the 1780s. So taken was Mr. Jefferson with the famous French cuisine, that he brought one of his servants all the way from Virginia, specifically to be trained in French culinary skills.

When Jefferson arrived home, at the end of the 1780s, his Monticello plantation was open to dozens of guests nearly every day. They would be treated to an array of exotic delicacies – from France. Including ice cream.

Historians at Colonial Williamsburg, VA claim there were ice cream molds in the shapes of strawberries, fruits and even asparagus.

Jefferson’s particular recipe was written in 18 careful steps, including such notations as “a layer of ice, a layer of salt for three layers.” Then he added a note to “put it in moulds jostling it well down on the knee then put the moulds into the same bucket of ice.” It is said that George Washington (or perhaps it was Mrs. W.) who received a copy of the recipe for ice cream and served it as President. It is further said that George and Martha had a particular apparatus for making ice cream. But since they never lived in the White House, the Washingtons cannot get credit.

But for certain, in 1801, by the time Thomas Jefferson was our third President and actually living in the White House, ice cream was served. One dinner visitor expressed amazement that it been brought to the table “in the form of small balls, enclosed in cases of warm pastry” – like a modern-day Baked Alaska. Without the flames.

Dolley Madison served ice cream for years before the Madisons lived in the White House. As First Lady, she popularized the sweet treat throughout the country.

Dolley Madison, wife of Jefferson’s Secretary of State, was frequently asked to serve as hostess for the widowed President. Her grace and superb social skills were remarkable, and she became the acknowledged leader of Washington society.

First Lady Dolley Madison exchanged recipes with many congressional and government wives. Ice cream was likely one of those recipes.

When James Madison became President in 1809, Dolley was the most popular woman – if not the most popular person in the country. The White House became the center of constant rounds of luncheons, dinners, balls, teas, receptions and suppers. The kitchen was probably never closed. Invitations were generously extended, and Mrs. M. herself would greet guests and make sure they were properly introduced – at least to somebody. It was part of her charm, and a cornerstone of her popularity.

By that time, ice cream had become a fashionable dessert for the Washington set – and undoubtedly elsewhere. Mrs. Madison was known to exchange recipes with many congressional wives, so it is likely that the recipe for ice cream was among those she passed along to the “rest of the country.”  It is also likely that since it was such a hit in Washington, everyone was anxious to try it out. 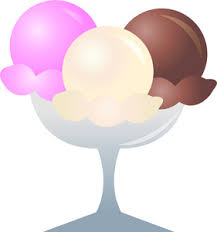 Vanilla, chocolate and strawberry have been the most popular flavors for generations. “Oyster” never really caught on.

Dolley, who was known to have had a sweet tooth, served it often. We aren’t sure about chocolate syrup, “jimmies” or M&Ms. We really don’t even know what flavors she served, other than vanilla, although adding fruits and berries would seem to be a no-brainer even in the early nineteenth century. One story mentions that Dolley’s favorite flavor was oyster ice cream, but it doesn’t appear that it ever caught on.

Allgor, Catherine, – Parlor Politics: In Which the Ladies of Washington Help Build a City and a Government, 2000, University of Virginia Press

1 Response to Tom and Dolley: The Original Ben and Jerry